by General Franco Lee Ezute And His Harmony International Band 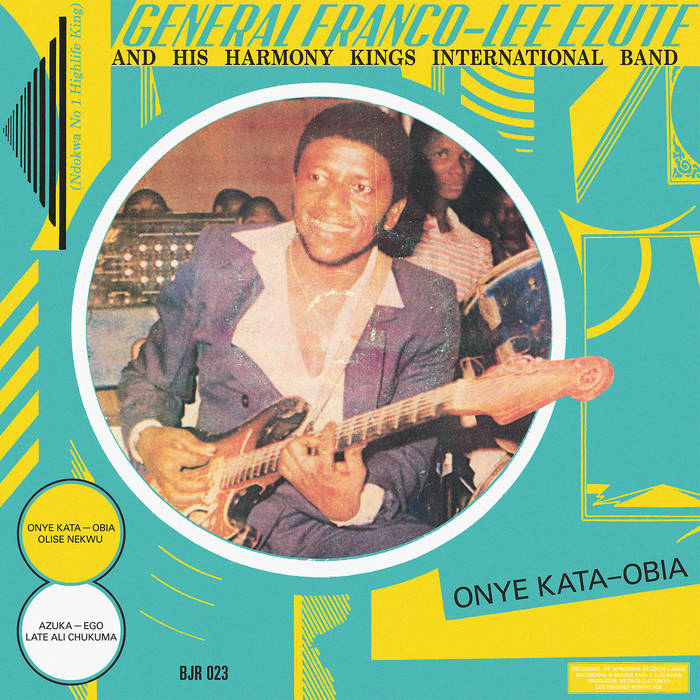 bonnieprince Absolute master. The whole album start to finish is excellent. If you're a fan of highlife of any kind, get this! Favorite track: Olise Nekwu.

For the casual fan of Nigerian music, certain names immediately come to mind at the mention of the phrase “Igbo highlife”—internationally recognized stars like Chief Stephen Osita Osadebe, Celestine Ukwu, Oliver De Coque, and The Oriental Brothers. Intermediate students of the genre might cite less universally lionized but still tremendously influential players like the Ikenga Super Stars, Mike Ejeagha, or Goddy Ezike. The true aficionado, however, is likely to chatter enthusiastically about someone like Franco Lee Ezute, and how he was the avatar of a spirited new take on the style that revitalized and redirected the genre in the 1970s and 80s.

To this contribution to the conversation, the purist might counter that Ezute, and others of his ilk (King Ubulu, Ali Chukwuma, Rogana Ottah, Bob Fred, Mmadu Osa International Band, etc.) despite singing in what appears to be the Igbo language and utilizing Igbo cultural motifs, technically do not qualify as Igbo highlife at all. Instead, they should be categorized as Anioma sound.

But what exactly is Anioma sound? Well, that can often be a complicated to quantify as the concept of “Anioma” itself, and both continue to stoke passionate debates: Is Anioma music simply a variety of Igbo highlife, or its own unique genre? And are the Anioma people Igbos… or something else altogether?

The word “Anioma” is an acronym encompassing the names of four language groups in present-day Delta State, Nigeria: Aniocha, Ndokwa, Ika, and Oshimili. The tongues spoken in these regions are generally considered to be mutually intelligible with standard Igbo, and are frequently counted among the over 30 distinct dialects of the Igbo language. Over the years, the Anioma peoples have variously been described as “Western Igbos,” “Bendel Igbos” and “Delta Igbos.” But many indigenes of this area stubbornly maintain that despite speaking variations of the Igbo language and bearing what sound like Igbo names, they are not of Igbo descent culturally or genealogically. Contemporary Anioma historians have popularized the theory that they are descendants of the Bini peoples in neighboring Edo State who migrated to the western border of Igboland and took on much of the language and culture. While there is not much substantial evidence to support this narrative, it’s one that is easy to believe when you listen Anioma music—specifically the highlife produced by the natives of the Ndokwa (or Ukwuani) area. On the surface it sounds like Igbo highlife, but something about it is… different.

Ukwuani highlife features Igboid lyrics, and the same kind of mellifluous, laidback guitar lines you’d expect to hear from the likes of Osadebe, but the rhythm section is often much harder. The basslines are deeper and more insistent, the percussion more aggressive and animated. In short, the rhythm is more reminiscent of Bini musicians like Sir Victor Uwaifo, Osakpamwan Ohenhen and Osayomore Joseph. This fusion of Edo and Igbo elements creates a sound of a particular intensity, one that brought new life to highlife at a time when it was sliding into the doldrums. Many players participated in this infusion of new energy, and one of the most influential was General Franco Lee Ezute.

***
Francis Ezute was born on 16 January 1949 in the Ndokwa region. Even as a child he had already acquired the nickname Franco Lee and a reputation for musical proficiency. His father was a chief priest to a local deity called Nkata and young Franco Lee would play various percussion instruments during celebrations of Nkata. Alas, Franco Lee’s father passed away when he was eight, and his mother died the following year, leaving him and his siblings orphaned. Once he had completed his primary education, he set off to build a new life for himself, relocating to the town of Abavo, in the Ika region. There, he was taken in as an apprentice in a local music group.

During Ezute’s teenage years in the 1960s, the predominant popular musical style in Nigeria was dance band highlife. In the nation’s commercial capital of Lagos, big, flamboyant party bands purveyed this brassy, calypso-accented style that was widely regarded as the country’s national music. Highlife was produced and enjoyed by Nigerians from all walks of life, and from all the nation’s over 200 ethnic groups. In a republic of almost jarring diversity, it was a musical common language. Some of the biggest stars of the day included the Yoruba bandleaders Roy Chicago and Victor Olaiya, Kalabari superstar Rex Lawson, the Igbo crooner Stephen Osadebe, and Bini guitarist Victor Uwaifo. Perhaps the most exciting artist of the era, though, was the “Western Igbo” trumpeter and singer Eddy Okonta, who brought a peculiarly Anioma-oriented brand of animation to his highlife. Other Anioma bandleaders such as Charles Iwegbue and Zeal Onyia were also feted for their uniquely energetic approach to the style.

In the territories outside of Lagos and other big cities, smaller dance bands offered their own stripped-down and more locally situated interpretations of highlife. One of these was the Melody Makers, led by the Ukwuani bandleader Professor S.N. De Opia. Opia called his style of highlife osibi—a more rustic sound characterized by deep and haunting tones that were antithetical to the broad and breezy stylings that typified the cosmopolitan mainstream scene. Having learned most of the ropes of the dance band ecosystem, teenage Ezute joined De Opia’s outfit in the late 1960s. With the Melody Makers, Ezute continued to expand his mastery of the dance band infrastructure, becoming proficient on guitar, bass, drums and congas, as well as racking up composition credits in the band’s repertoire. His facility in every aspect of the musical infrastructure earned him the moniker “The Harmony King,” and established him as a key element in De Opia’s growing popularity.

By this time, Nigeria was sinking into the waves of a civil war instigated by the Igbos’ attempt to break off the entire eastern region of the country and secede to form a new sovereign state called Biafra. The federal government’s effort to end the secession would result in a brutal conflict that lasted from 1967 until 1970, but ended with a fragile peace restored and the structural integrity of the federation intact. However, the ethnic discord sown by the war would have a lasting effect on Nigeria’s musical and cultural life. No longer did Nigerians of all tribes dance together to highlife: the people of the western region retreated into more Yoruba-centric styles such as juju, apala and sakara, while highlife became associated with the eastern region, primarily with the Igbos. In addition, the status of highlife took a hit from the younger generation’s exuberant embrace of imported soul music, as well as the new soul-inflected “afro beat” style being popularized by the Yoruba bandleader Fela Kuti. Rex Lawson was regarded by many as the last keeper of the flame for highlife’s golden age. When he died suddenly in early 1971, it seemed symbolic of highlife’s wane into irrelevance.

With the old giants of highlife falling by the wayside, the vacuum in the now-downsized highlife market began to be filled by unique, regional voices such as De Opia and Muchacha Imuzor. Imuzor, an Ukwuani troubadour who practiced a profoundly lyrical brand of “native blues,” scored a number of successful releases on EMI Records and had started to develop a following in Lagos. He was backed by a band of fiery youthful Ukwuani musicians: singer/guitarist Isaac Rogana Ottah, guitar wizard Bob Fred, percussionist and vocalist Show Scatter. The twenty-two-year-old Harmony King would soon jump ship from S.N. De Opia to join Imuzor’s band of young renegades blazing the trail with their new action-packed take on highlife.

The Anioma style of highlife was becoming even more of a sensation with the emergence of Ali Chukwuma, a singer who had helped revitalize Osadebe’s performance after the war. Ali Chuks’ keening take on Igbo highlife with his Peace Makers’ band was a clarion call announcing Anioma sound as a force to be reckoned with, and various capitalists began to invest in bands and labels to exploit the interest in this electrifying music.

One such entrepreneur was Mr. John Nwabue, who encouraged Muchacha Imuzor’s band of musicians to break out on their own, financing their reorganization under the leadership of Rogana Ottah. Ottah, a distinctly persuasive singer and composer, had cut his teeth playing with Lawson, Osadebe and Iwegbue, was a natural star; the 1977 EMI debut International Brothers Led by Isaac Rogana Ottah was a positive smash. In the same year, a slightly different configuration of the band released the hit album Ukwani Special on Imade Records, credited to Issac Rogana Ottah & His Black Heroes.

The sophomore Black Heroes LP Ejeluno Vol. 2 was released in 1978, but by then the group had already splintered. Both Bob Fred and Franco Lee Ezute are credited on Ejeluno Vol. 2, but Fred was already heading for the door to join a reconstituted version of the International Brothers under the leadership of singer Steady Arobby. Ezute meanwhile was putting together his own group, enlisting his brothers Sunday Ezute and Bob Shanka Ezute, and the trumpeter Dr. Onyeaba Opia. He would christen this aggregation with his own sobriquet, The Harmony Kings International.

The Harmony Kings International Band were off and running, releasing their eponymous first album on the local Benin City label Ekimogun Records in 1977. However, it was not until 1981 that the band scored their first smash hit: The album Harmony Kings International Band Led by Franco Lee Ezute is popularly known as “Ethiope Social Club,” for its sidelong floor-filler of the same name which made the LP a bestseller and perennial party essential across Igboland, further solidifying Anioma sound as a cornerstone of modern Igbo highlife.

Rogana Ottah would soldier on through the 80s with new Black Heroes lineups, and Bob Fred would leave the International Brothers to lead his own Ukwuani Brothers, but Franco Lee Ezute would remain the most consistent of them all, cranking out album after album of his dynamic, rugged dance music under the Harmony Kings tag. So tight was his stewardship of his band that fans bestowed him with the honorific of “General,” and also the title of “Ndokwa Number One Highlife King.”

The new Anioma sound suffered a blow in 1986 when its avatar, Ali Chukwuma, died from liver failure. He was mourned by music lovers throughout Igboland, and Franco Lee Ezute mounted a passionate tribute to him on 1989’s Onye Kata Obia, one of the Harmony Kings’ most direct and powerful albums. Ironically, it is also one of the their most underrated and littlest-known releases, having been issued on the tiny G-E-T label.

Until now, that is.

It’s an enormously exciting event to have this album reissued in a gorgeous, remastered edition, which will bring the music of this master artist to a new audience, and hopefully ignite a new interest in the exhilarating Ukwuani sound of the 1970s and 80s. If you’re about to listen to this music for the first time, you’re definitely in for a treat.

Franco Lee Ezute died in 2013 at the age of 64, but thanks to this record his harmony will continue to reign supreme.

Bandcamp Daily  your guide to the world of Bandcamp

Benji B talks about his new compilation ‘Deviation Classics’